Feed the Lion – or feed lions to humans?

Trafalgar Square’s festive 5th Lion was designed to playfully ask humans to make sure lions are fed. It was a shock for famous set designer, Es Devlin, and the London Design Festival team to learn that Panthera leo today is in crisis. It has recently been revealed that not only are our lions starving in captive breeding centres, these iconic and dearly beloved animals are now being bred for human consumption in a notorious fast-growing cross-border “lion bone” industry.

1,500 lions starved to death for their skeletons to be processed into bones for consumptive use in Asian markets – that’s the “quota” of lions authorised last month by South Africa’s Dept. of Environmental Affairs to be slaughtered in cross-border trade to Far Eastern Markets. One has to ask: is this what CITES (Convention for the International Trade) envisaged when the international regulatory body legalised the captive breeding-for-killing industry during its most recent convention hosted by South Africa in 2016?

To commemorate the impending deaths of these kings and queens of the bushveld, Britain’s festival will heroically culminate with an all-night vigil on 23 September 2018, as supporters of more than 30 animal welfare organisations converge on Trafalgar Square to honour each lion by name. 1,500 names will be provided by the children of the “StarLion” centres, eco-cultural education centres established by the Global White Lion Protection Trust, a community-based conservation organisation which has been opposing the captive-breeding-for-killing industry of lions for than 2 decades.

Linda Tucker, CEO of the Global White Lion Protection Trust, is calling for lions to be honoured as a “living heritage” for future generations.

“In my part of the world, our indigenous communities celebrate these proud and noble animals with love and respect – and, accordingly, it’s a great African Tradition to name animals. We will not allow our beloved lions to become numbers, factory-farmed in processing-plants to be killed. When CITES convenes again in 2019, this abomination has to be shut down by international law,”  Says Ms. Tucker.

The South African government has been attempting to shut down this atrocity since 1997, when Britain’s investigative Cook Report exposed the practice of breeding lions in cages for commercial trophy hunting purposes. It was called “Canned Hunting” at the time, because the lions were tame, and then hunted in small areas, effectively becoming “canned” commodities. A moratorium was imposed by the South African government to prohibit these malpractices, but it was contested in court by the then “Predator Breeders Association”. Although the South African government won the court case in its High Court, this was overruled in the Supreme Court in November 2010, under questionable circumstances, and these practices have since been allowed to continue, largely unpoliced and unregulated. What began as a handful of illicit operators in the 90s has escalated into a full-scale industry, which now offers a commercial cub-petting experience for international tourists.

Ms. Tucker describes how this full-scale cuddle-to-kill industry works in her forthcoming TEDx Talk, in Wilmington USA. The following is an extract from her talk content:

Baby cubs are forcibly removed from their mothers, and handed around from tourist-to-tourist, who pay to hug them. When those tame cubs grow up a little, they might even go walking with tourists, who also pay to walk with them. But when they are too big to cuddle or walk with, these tame lions mostly end up being shot as trophies for international hunters or starved to death and ‘processed’ into lion bones for Asian traders. Cuddling a cub today is a death sentence!  – for the Lion.

Since CITES legalisation of this industry, it has now been revealed there are more than 260 captive breeding centres, factory-farming baby lions for killing, almost all of them offering cub-petting to tourists.

The London Design Festival exhibit will culminate on 23 September 2018, with the midnight vigil, in which people will gather to hold a candle for lions. The vigil will close at dawn on the 24th, importantly, the day celebrated as “National Heritage Day” in South Africa. Ms. Tucker adds: “May this act of honouring lions as a living heritage usher in a new dawn for our most proud animal.” 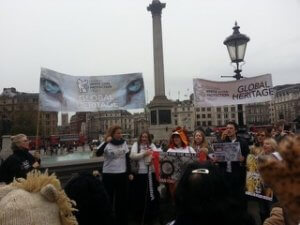 All night vigil, but those we wish to stay for the first shift are welcome to depart at 8pm.

Others unable to congregate at the Trafalgar Square, famous for its century-old four bronze lions and Nelson’s Column, are invited to hold vigil in their respective geographic locations.

Please sign this petition to help put an end to the lion bone trade: https://www.thepetitionsite.com/takeaction/684/142/325/